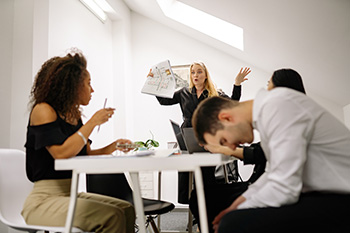 Workplace conflicts are often very responsive to mediation. The ongoing day to day conflicts and issues that can create a strained and sometimes toxic workplace will and do contribute directly to lost productivity, strained staff interactions and in advanced cases even litigation.

In the past, workplaces were once top-down hierarchical based organizations. Modern management theory and practice has led to the adaptation of more peer and team based work settings. In past experience, the boss was always right and the final answer. In today’s workplace co-workers often find themselves left in a position to resolve their own disputes but without the skills or training to effectively resolve issues. Issues steep and boil until they boil over creating conflict, drama and lost productivity.

Sometimes the issues are created from simple misunderstandings between coworkers; they might result from differing personality styles, unclear goals or objectives, or interpersonal conflicts among employees. Sometimes conflicts escalate into hostile workplace issues, workplace bullying, or harassment complaints. These issues in turn can escalate into employee grievances, discrimination complaints and even terminations.

A survey conducted by Price Waterhouse and Cornell’s PERC Institute on Conflict Resolution of over 530 corporations in the Fortune 1000 category revealed the following trends:

For more information, or to set up your initial consultation, contact Sheila-Marie.